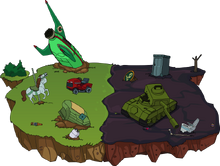 The Rumble is a guild based event in which guilds with at least 15 members are matched against other guilds in a 10 match, Arena style, fight. Each Rumble, your guild is pitted against 18 other similarly ranked guilds.

Although this time it's not just about winning.

You get a score based on how much damage you take! If you don't take any damage, you are awarded 100 points per match. Over the course of 10 matches per round, all participants have a maximum potential of 1,000 points.

The rewards are bases on a tier system.

Community content is available under CC-BY-SA unless otherwise noted.
Advertisement